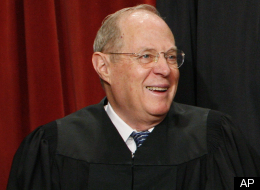 Tuesday’s decision in Perry v. Brown (the “Prop 8” case) means that roughly one year from now, it is likely that the United States Supreme Court will be giving its opinion on the now infamous 2008 ballot proposition that resulted in barring Californian gay couples from joining in marriage. Justice Anthony Kennedy will ultimately decide the fate of millions of gay people who wish to join in the civil institution of marriage, and his opinion will likely  have a significantly broader impact on cases involving sexual orientation discrimination.

Why I think the Court will:

all, after the jump…

As Ashwin discussed at the time, in August 2010, United States District Judge Vaughn Walker found Proposition 8 to be violative of the US Constitution. Judge Walker premised his opinion on both of the two most important legal doctrines that are used to determine whether laws are unconstitutionally discriminatory: equal protection and substantive due process. The particularly interesting aspect of Judge Walker’s opinion is the extent to which he cited language used by Justice Kennedy in two landmark Supreme Court cases: Romer v. Evans and Lawrence v. Texas. First—a brief review of those cases, and then an explanation as to why I believe that Judge Walker’s citation of Justice Kennedy in this California-focused case will ultimately affect the lives of gay and lesbian couples in Minnesota and beyond.

Romer v. Evans
The Court decided Romer in 1996; the case dealt with a successful ballot measure that sought to amend the Colorado Constitution to block local governments from taking any action to prevent discrimination against gay people. By attempting to overturn various laws and policies that existed at the time, the measure essentially sought to legalize the discrimination of gay people via popular vote. The Court voted 6-3 that such an attempt was a violation of the Equal Protection Clause of the 14th Amendment, marking the first time that gay people were afforded such protection by the Supreme Court. Justice Kennedy wrote the majority opinion, determining that there was no rational basis for such a law, and suggesting that it was born of nothing more than a bare desire to harm gay people.

Lawrence v. Texas
In 2003, the Court decided Lawrence, which dealt with two gay men who were prosecuted by the State of Texas for purportedly having sex with each other. (I say “purportedly” because law professor Dale Carpenter’s Flagrant Conduct: The Story of Lawrence v. Texas suggests the defendants may not have been having sex at the time of their arrest.) By including sex acts between consenting gay adults under state sodomy laws, Texas and various other states essentially sought to criminalize homosexuality. Like in Romer, the Court voted 6-3 that the law was unconstitutional. Unlike Romer, the majority didn’t decide Lawrence on equal protection grounds, but instead ruled that it violated substantive due process guarantees; this marked the first time that gay people were afforded such protection by the Supreme Court. Justice Kennedy again wrote the majority opinion (which explicitly overruled the 1986 case of Bowers v. Hardwick), stating that there was simply no legitimate state interest in such laws.

Level of Constitutional Protection for Sexual Orientation
Legal experts and anti-discrimination lawyers have taken note of one very important and unresolved issue: which level of Constitutional protection should to be applied in cases involving gay people. The problem is basically one of ends versus means; while the outcome (or, “the ends”) of Lawrence and Romer were good for civil rights and for gay Americans, the level of protection that is to be afforded to gay people (or, “the means”) wasn’t made entirely clear by Justice Kennedy. He was unequivocal on the former and ambiguous and confusing on the latter.

While one level of protection, such as that afforded to racial minorities, will make almost any law targeting a select group of people unconstitutional, others (such as the relevant hurdle for laws targeting age) will only require that there be some rational relationship between the discriminatory law and a legitimate government interest. One might wonder why the means matter, so long as the proper ends are achieved. The problem is that as courts address issues such as marriage, adoption, and other unsettled matters of discrimination against gay people, the outcomes of cases are unpredictable, inconsistent, and easily manipulated  In short: it’s not clear how much Constitutional protection exists for gay people.

Anti-Marriage Amendments in the Wake of Lawrence and Romer
Enter the issue of state constitutional amendments prohibiting gay couples from joining in marriage or similar civil contracts. As legal challenges against them mount (such as the Prop 8 case), the immediate question is what level of protection should be afforded to gay people in the determination of whether such ballot measures and amendments are constitutional. Because Lawrence and Romer are the only standing and applicable Supreme Court precedent regarding discrimination against gay people, and because Justice Kennedy was unclear with regard to the level of protection that should be provided, Judge Walker was forced to decide the Prop 8 case using the lowest hurdle–despite noting that gay people should be afforded the highest level of constitutional protection that is possible: strict scrutiny review.

While Judge Walker still found Prop 8 to be unconstitutional on both equal protection and due process grounds, the result of having to use only the rational basis test as the hurdle is that higher courts have much flexibility when reviewing his opinion. And, in fact, the first court to review Judge Walker’s opinion was a three-judge panel of the Ninth Circuit of the United States Court of Appeals; its opinion displays signs of the problem. In a 2-1 decision released in February of this year, the panel affirmed Judge Walker’s ends (Prop 8 is unconstitutional) but disagreed with his means: the panel only found Prop 8 to be unconstitutional on equal protection grounds, narrowing the decision so that it only applies to California’s anti-marriage amendment, and applying only the rational basis test.

Tuesday, the Ninth Circuit declined to have a larger, 11-judge panel review the three-judge panel, which means that the next stop is the Supreme Court, should it decide to accept the case.

Why SCOTUS Will Grant Cert., & Why Justice Kennedy Matters.
While the Supreme Court need not review the Prop 8 case, the current state of political, social and legal affairs with regard to gay Americans makes it very likely that it will grant certiorari. Consider:

In short: there is a desperate need for the Supreme Court to provide guidance as the country continues to grapple with the issue of equality for gay Americans.

When the Supreme Court takes up the petition by Prop 8 supporters (which will happen this fall), the case will need only four of its nine Justices to vote for review. The ideological composition of the Court has shifted since Romer and Lawrence were decided. While those opinions were both 6-3, the current makeup of the bench makes it more likely that there will be:
-4 Justices who will almost certainly vote in favor of Prop 8. (Justices Scalia, Roberts, Alito, and Thomas)
-4 Justices who will almost certainly vote against Prop 8 (Justices Breyer, Ginsberg, Sotomayor, and Kagan)
-1 Justice who will decide the case (Justice Kennedy)

As a side note: in light of his dissenting Lawrence opinion (where he suggested, in response to Justice O’Connor) that Lawrence combined with Romer left the Court no choice but to eventually find that gay couples are entitled to marriage equality, one might wonder how Justice Scalia can now dissent to marriage equality. While various people, including Judge Walker, have pondered this, it is probably prudent to assume that Justice Scalia will find a way.

While there are some dangers for both wings of the Court if cert is granted, I believe the liberal wing will vote to grant cert in the well-held belief that they are almost certain to get Justice Kennedy’s vote.  When taken collectively, the facts make it hard to believe that the Court won’t take cert., and that Justice Kennedy won’t vote to strike down Prop 8. Consider:

In essence, Perry v. Brown will be Justice Kennedy’s biggest moments on the bench, his Brown v. Board– if you will. In Flagrant Conduct, Carpenter also tells of the morning of June 26, 2003 when Justice Kennedy delivered the opinion of the Court in Lawrence; he tells of the overwhelming sense of importance that was clear to every person in the Supreme Court that day; and, he tells of the moment when Justice Kennedy faltered for a brief second as gays and lesbians reacted—some visibly weeping—while he spoke about them as a class of human beings deserving of constitutional protection. If that moment was watershed, if that case was landmark, imagine what the gallery will be like on the day—just over one year from now—when the country will look to Justice Kennedy to decide how millions of American families can be treated under the law.

Justice Kennedy was ahead of the times when he wrote his 1996 Romer opinion and, arguably, his 2003 Lawrence opinion. Yet, he spoke of gay and lesbian Americans with terms of dignity and respect, and he undeniably helped changed their lives for the better. Despite that, their status as equal citizens in America is in serious question. Justice Kennedy is no doubt aware of this context, no doubt aware that he will likely hold the reigns as one of the most significant civil rights cases in American history is decided next year—his 25th year on the Court.

With all of the above in mind, it is hard to imagine Justice Kennedy not being explicitly clear that gay Americans are a class deserving of heightened scrutiny, and it’s hard to imagine him not broadening the scope of the Prop 8 decision so as to strike down each and every state constitutional amendment that bans marriage equality.

How Will The Prop 8 Case Change Employment  and Civil Rights Law?

Ashwin briefly discussed the implications of this case on employment law when Judge Walker’s opinion came out in August 2010.  Should the Supreme Court decide to strike down Prop 8 in the manner I have suggested above, this case will become controlling precedent that will make discrimination on the basis of sexual orientation by government entities almost impossible to justify; thus, public employees across the nation will have clear protection from such discrimination.  Furthermore, police officers, public housing authorities, and other government officials throughout the country will be prevented from discriminating against people who are gay.  As it stands right now, just under half of the US states prohibit sexual orientation discrimination by both public and private employers.  Minnesota, for example, has made sexual orientation discrimination illegal in the Minnesota Human Rights Act.  Unfortunately, it will take passage of the Employment Non-Discrimination Act to ensure that such discrimination by private employers is prohibited by federal law across the country.