On May 24, 2013, Governor Mark Dayton signed HF 542, a bill adding additional protections for whistleblowers.  The Minnesota Whistleblower Act (MWA) was originally passed in 1987, and the purpose was to prohibit employers from acting in a retaliatory manner against employees who made a good faith report of any federal or state law or rule adopted pursuant to law.[1]  Ambiguities in the language of the statute have allowed for many different interpretations on statutory meaning throughout the years.  In Anderson-Johanningmeier v. Mid Minnesota Women’s Center, Inc., the Minnesota Supreme Court dealt with conflicting case law in determining the applicability of a public policy requirement in relation to whistleblower claims.[2]  The court concluded that public policy requirement relating to all whistleblower claims was not in accordance with the statutory language.  While the additional protections signed into law by Governor Dayton do not deal with the public policy requirement, the additions help to clear up other potential ambiguities within the statute. 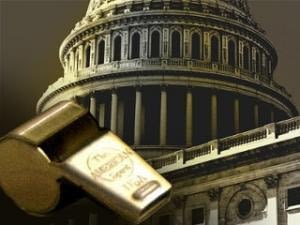 HF 542 serves two purposes in aiding the original whistleblower act.  First, the new law provides a definitional framework for several key terms that were left for interpretation.  Three sections of § 181.931 have terms that are defined in the new law, in an attempt to reduce conflicting interpretations, and to clearly exemplify the laws intent in protection of whistleblowing reports.  Second the bill expands the scope reported violations that are protected.

The bill defines “good faith” as “conduct that does not violate section 181.932, subdivision 3.[3]  Subdivision 3 reads: “This section does not permit an employee to make statements or disclosures knowing that they are false or that they are in reckless disregard of the truth.”[4]  Using this definitional framework a good faith report is any report that is not knowingly false or blatantly disregarding of the truth.  This language deviates from the precedent that had been previously established, wherein the requirement was that an employee’s good faith report was for the purpose of exposing an illegality.[5]  This statutory change will likely protect any truthful reports of employees whether or not they sought to expose any illegal wrongdoing.

The additions to MWA also defines “penalize,” as “conduct that might dissuade a reasonable employee from making or supporting a report, including post-termination conduct by an employer or conduct by an employer for the benefit of a third party.”[6]  This definition has two implications in the application of whistleblower claims.  First, the inclusion of post-termination protection allows for protection of individuals no longer working for the reported violating company who bring forth violations, expanding the scope of protection beyond mere “employees” as previously defined as “a person who performs services for hire in Minnesota for an employer.”[7]   Second, the definition of “penalize” will eliminate previous erroneous understandings or interpretations in prior case law, which defined said term as requiring a material change in the terms or conditions of the employment.  The definition provided in the new law increasingly constricts the retributive ability of an employer reacting to a reported violation.

The new law defines “report” as any “verbal, written, or electronic communication by an employee about an actual, suspected, or planned violation of a statute, regulation, or common law, whether committed by an employer or a third party.”[8]  This definition greatly expands the scope of protection afforded under the MWA.  The addition of “planned violation of law,” will allow for protection of reporting the planning of illegal activities, despite the actual act not having yet commenced.  In addition the inclusion of “common law” violations to the protected reports, will likely have a great impact on both the types of claims reported, and the overall number of reported violations.  Instances that may have been governed by common law for many years in the past may have been intentionally not dealt with by legislative bodies, since case precedent had already established a legal framework.  While common law may have governed the legality of a particular action, the strict reading of the original MWA did not protect reported violations unless they specifically dealt with a violation of enacted law.

While the additions of definitions will undoubtedly change many previous precedents and conflicting interpretations of the MWA, the newly defined terms will now provide a clearer guide to the type of actions that the legislature seeks to protect.  The changes will expand the protections afforded employees, and as a result of the additions, the current rise in reported violations will likely continue.  The incorporation of this law is a major victory for employees in Minnesota, as accountability, transparency, and justice are all enhanced in the new whistleblower protections.