The Age of Arbitration 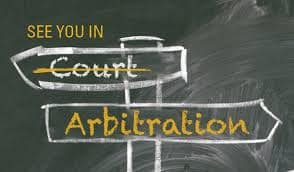 While this is certainly a method of dispute resolution used often, and certainly a process with which Madia Law is familiar, it is not the only way to resolve an issue between two parties.

For example, some disputes may be submitted to an administrative agency for resolution.  And, of course, with every dispute, informal settlement negotiations abound.

One form of dispute resolution that is quite common and well-known to legal practitioners, but, perhaps, less well-known to folks outside the industry, is arbitration.

In 1925, Congress passed what is known as the Federal Arbitration Act (FAA).  The FAA was a congressional response to judicial hostility toward agreements, usually between businesses, requiring the parties to the agreement to submit any issue arising out of the contract to arbitration. Such agreements, argued the judiciary, stripped courts of their power to preside over such issues. As agreements to arbitrate became more prevalent, however, parties’ to contracts containing arbitration clauses became more upset with courts that would strike arbitration clauses from mutually agreed-upon contracts and forcefully submit issues arising out of these contracts to formal litigation. The FAA was passed to specifically enforce the agreements that parties had made to arbitrate, rather than litigate, disagreements and to stop the court from thwarting those agreements. David Horton, Federal Arbitration Act Preemption, Purposivism, and State Public Policy, Georgetown Law Journal, Vol. 101, 1226-27 (2015).

In recent years, arbitration clauses in contracts have flourished. If you have a cell phone provider, have ever ordered anything from Amazon, or have opened a credit card, it is likely you have agreed to submit any issues arising out of the transaction to arbitration. These agreements also usually provide that any decision made in arbitration will be “binding,” meaning final. Thus, these agreements require you to arbitrate your disputes with the cell phone provider, internet servicer, or bank and, under these provisions, you may not sue in a court of law.

Arbitration has its benefits – it is usually a faster process than filing a lawsuit and usually much cheaper as well.

The major downfall of arbitration, and perhaps the downfall not understood or not known to consumers, is that arbitrators have no obligation to follow the law and arbitrators’ decisions are almost impossible to review. See Oxford Health Plans LLC v. Sutter, 133 S. Ct. 2064, 2068 (2013) (“the sole question [on review] is whether the arbitrator (even arguably) interpreted the parties’ contract, not whether he got its meaning right or wrong … convincing a court of an arbitrator’s error—even his grave error—is not enough … a court may not correct [the arbitrator’s] mistakes”). Further, arbitration proceedings are hosted by private companies and arbitrators are employees or contractors of these private companies, meaning that the arbitrators are not bound by the same ethical standards of a judge and do not need to impose the law used in courts to decide the cases before them.

Courts are largely unable to review arbitrators’ decisions, and not just in cases where the consumer has purchased a product and that product was a defective, or in cases where banks are taking too many fees out of a consumer’s bank account. Arbitration agreements extend to the resolution of even more serious disputes—such as unlawful discrimination and wrongful death.  Jessica Silver-Greenberg and Robert Gebeloff, Beware the Fine Print: Part I, II, and III, New York Times.

In some cases, employees are bound to arbitrate disputes with employers, eliminating opportunities for discrimination or sexual harassment cases to be heard in a court of law.

While the examples in the New York Times series are extreme, they may serve as cautionary tales to consumers when clicking on those “Agree to the Terms and Conditions” buttons.

However, in some instances arbitration can serve as a more favorable forum than traditional litigation. If you find yourself in a dispute with another party with whom you have a contract with an arbitration clause, you will want to make sure you hire an attorney that has experience with arbitration proceedings.

To learn more about arbitration, and to read the New York Times series, follow these links:

Leahy and Franken Call for Change after NYT Series on Arbitration