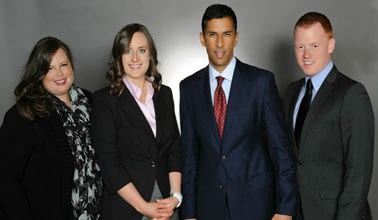 In the first case, Peters v. Olson et al, Madia Law represented a plaintiff that entered into a doomed transaction on the advice of her real estate agent. This transaction cost the plaintiff over $100,000.  The jury returned a full verdict for our client.

The second and third case were tried back-to-back — literally — and both came to Madia Law after having been remanded to the trial court from the court of appeals on a reversal of summary judgment.  The first case started on October 31 and went through November 4.  The second case started the following Monday, November 6, and was tried through November 10.

In the first case, Madia Law represented a plaintiff poised to embark on a profitable business venture with a partner until three individuals convinced the partner to cut our client out of the deal.  The jury returned a verdict of $175,000 for our client.

In the second case, our clients, two Richfield Police Officers, were denied a promotion because of their age.  The jury returned a full verdict in our clients’ favor, including awarding each of them the full amount of punitive damages available by law.

In addition to Madia Law’s tremendous success at trial, we were able to achieve some outstanding results for our clients through settlement.

Madia Law represented a client that tipped off the feds to Medicare and Medicaid fraud going on at a Wisconsin company.  The client came to us with a suspicion that her employer was violating the law.  We, in turn, worked with the FBI, the IRS, and the DHHS to investigate and litigate the claim.  The case resulted in a $6.2 million civil settlement as well as a criminal plea.

We also represented a class of housekeepers whose employers were violating both the State and Federal wage and hour laws.  That case resulted in a settlement, compensating the housekeepers for the hours they worked overtime and punishing the employer for violating the law.

In Clark v. American Casing & Equipment, Inc., we represented a client that was severely mistreated by his employer.  The employee was called racial slurs, assaulted, and, in one instance, urinated on.  Madia Law helped the client settle for $250,000 and the employer committed to implementing better workplace diversity training to prevent similar issues from arising in the future.

Madia Law also had success before the Minnesota Court of Appeals.  In Sanchez v. Dahlke Trailer Systems, Madia Law represents an undocumented worker that was injured on the job.  The employer knew that our client was undocumented the entire 9 years he worked for Dahlke.  However, Dahlke did not fire our client until he suffered a horrendous injury on the job, in an apparent attempt to avoid liability under the workers’ compensation laws.  The district court granted Dahlke summary judgment but, on appeal to the Minnesota Court of Appeals, the court of appeals reversed.

The case went to the Minnesota Supreme Court and Madia Law had the opportunity to argue our client’s case in front of the highest court in Minnesota.  We are still awaiting an opinion.

Two of Madia Law’s attorneys had the honor of being named 2016 SuperLawyers Rising Stars, and Joshua Newville was honored this year by the Minnesota Lavender Bar Association with the Equality & Justice Award.

We are excited to take on all of the opportunities in 2017.  First, we are expanding.  We are adding more administrative staff and one more attorney.  Second, we continue to build on our trial practice.  If you have a case that is going to trial, let’s talk.

We wish you all a happy new year and look forward to working with you this year.